Apple's iOS Simulator app is a helpful tool in building iOS apps. However, there is more than what appears on the surface. Recently a hack has been discovered to allow iPad Retina Display testing. I have also found a couple hidden features. As far as I know, these hidden hotkeys only work on the iOS 5 simulator.


The first, and least interesting, is the "Toggle Slow Animations" feature. This feature slows down animations making it easier to see the fine details. I've found this useful when "debugging" animations. This feature is normally toggled through the drop-down menu: Debug > Toggle Slow Animations. However, it can also be toggled by double tapping Cmd+Shift. If you ever have slow animations mysteriously turn on, then you may have accidentally activated this hotkey.


The second hotkey is more peculiar. I often use the hotkey Cmd+Shift+4+Space to take screenshots of the simulator. I noticed that sometimes a popup would show up that displays the keyboard localization languages I have turned on. It took a while, but I can almost consistently reproduce it. I first disabled the screenshot hotkeys:  (Apple) > System Preferences > Keyboard > Keyboard Shortcuts > Screen Shots > Uncheck all hotkeys. Then I opened the iOS simulator and used the hotkey Cmd+Shift+4+Space. Sometimes it takes a few tries. Other times I need to open/close an app and try again. Again, this hotkey only appears to work on the iOS 5 Simulator. You may also need to have more than one keyboard language activated. 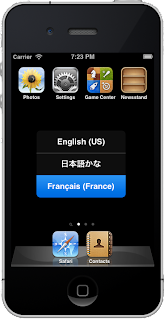 
I'm not entirely sure why this hidden feature exists in the simulator. If the multiple keyboards are setup, they can be easily changed using the language key on the keyboard. What is more interesting is Apple likely has many other hidden features.
Posted by Robb at 7:37 PM